Born on the coast of the mediteranean sea in southern France. Joss bears as a second name“ Messaouda ” which means ” kept promise” in arabic, the begining of something great for the lonelychild that she was, starting painting at an early age. 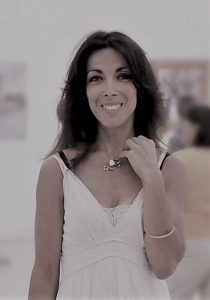 The devouring passion of painting never left her and she started to display her creations in galleries and exhibitions since 1986 thoughout France. She obtained several distinctions and prizes includingthe silver medal from the Académie de Lutèce Art Sciences et Lettres in Paris at age 20.and the gold medal at salon des Beaux-Arts de la ville de Nice in 1990 From 1993 to 1995 she produces a series of portraitsrepresenting officers for thr Musée des troupes de Marine in Fréjus followed by severalexhibitions around the world in US, Canada, Japan and Switzerland that gave her international exposure.

More recently, in 2012, the company Eiffage Picardie ordered four portraits of famous characters :Verdi, Dumas, Pasteur et Delacroix  which were used to adorn the prestigious building of the” Allée de l’Impératrice” in Compiègne.

Similarly, in 2014, 8 big paintings were created for Eiffage Côte d’Azur, to be placed on the walls of one of the most luxuous building of the Croisette in Cannes, the ” 7 croisette”.

Today, her creations are found in many collections around the world, both private and public.